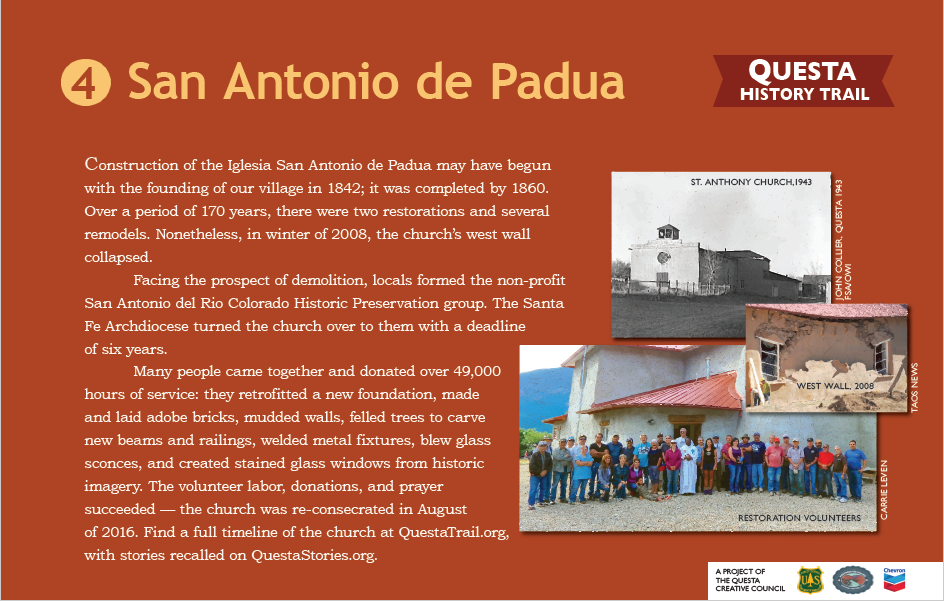 Labor of Love, Expression of Faith

Very little written history of Questa’s historic church exists, although there are many family memories and more recent experiences to explore.

Listen to interviews at QuestaStories.org; enjoy, learn, and contact us to add your own voice to this growing cache of important stories.

Today this once-damaged historic church is re-consecrated and again an important hub of the community.  It is also a site of pilgrimage for the faithful,  for local artists who paint the beautiful architecture beneath the soaring mountains, and for local craftspeople who take inspiration from the re-created fixtures and features.

1840 – “El Oratorio” is built; a place of prayer and religious congregation, on the outskirts of Questa by the side of Cabresto Creek, just south of State Hwy 38, under a cluster of old cottonwood trees.  This site is now abandoned.

1855 – Ponderosa pine trees harvested on Flag Mountain for roof vigas on San Antonio church, mules used to skid logs down to Questa, while some vigas were carried by hand by the men.

1860 – Bishop Lamy visits Rio Colorado and notes “the beautiful new church on the north side of the plaza.”

1873 – New church reported as existing in 1873 as part of Rio Grande to Denver Railroad map, and railroad stations connected by stagecoach and freight wagon.

1880 – St Anthony’s church built (reported as existing), according to Library of Congress. (Maybe the new church was listed as part of a U.S. Census.)

1942 – Msgr. Glenn Patrick Smith – first resident parish priest in Questa.  He had a ham radio and speakers, and kept the village informed during WWII.

200? – Adobe color plaster over lime stone? Must have occurred sometime then?

2008 – West wall of St. Anthony’s church collapses.
Repairs to the adobe walls undertaken since the 1970s had neither been lasting nor successful, resulting in continued degradation. An effort in the late 1990s to preserve the original east wall left the old wall intact but unstable, hidden and crumbling behind a facade.

2009-10 – Many, but not all parishioners, community members, and Village of Questa want to save the church.  Priest and Diocese of Santa Fe want to demolish the old and build anew.